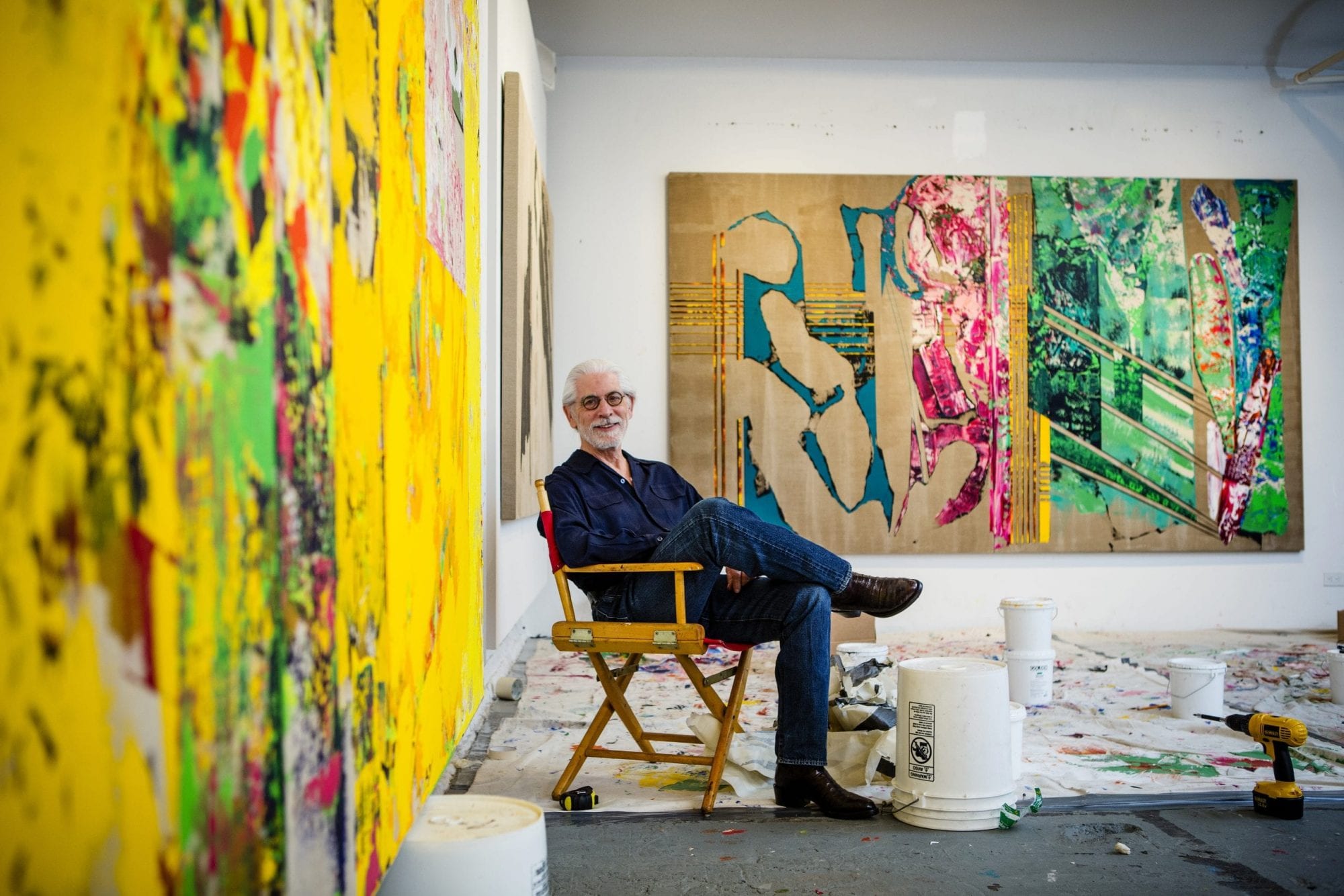 My abstract paintings echo the cacophony of urban life today. The competing surface tensions confront each other, creating a visual orchestration of discordant and harmonic tonalities. The compositions, resembling visual soundscapes, explore the notion of depth, both spatial and psychological. The chromatic intensity of my palate—densely pigmented colors applied in layers, yielding smeared and collided passages—is seductive in its tonality, yet retains a sense of distance. Countless thick layers of acrylic paint are juxtaposed with sections of raw linen that evoke holes in a membrane. The construction of my work is a kind of building—in the process, I use mud-knives instead of paintbrushes to model heavy acrylic, constructing organic volumes and architectonic planes. Vibrant skins stretch across the canvas to embrace a complex web of ideas, emotions, and textures.

I was born in North Dakota in 1951 and lived there until the age of thirteen. Thereafter, I lived part-time in California, where I eventually started my art education.

From the mid-1960s to the early ’80s, I was directly affected by the culture of the Bay Area. Its music, art, and politics, especially the UC Berkeley Free Speech Movement and the Black Panther Party, made me acutely aware of pressing social issues. Radio station KDIA, the premier jazz, funk, and soul outlet for the East Bay and San Francisco Bay area, transformed my understanding of what music is. The Oakland and San Francisco art museums taught me what it was to be a Bay Area artist. The redwood forests and the wild, rugged Northern California Pacific coastline showed me the power of the natural world. After receiving my MA in 1979 in metal fabrication, I earned an MFA in mixed media plastic arts from San Jose State University in 1981. In 1984, I was awarded a grant by the French ministry of culture to live and exhibit in Paris, Grenoble, and Nice. In France, my San Francisco Bay Area experiences resurfaced and drove me to painting. After looking at the work of Figuration Libre painters in France, as well as images by German and Italian Neo-Figurative artists, I began to blend those movements with what I had absorbed earlier on the West Coast.

In 1987 I moved to New York City, often traveling back and forth to Europe before settling permanently in the downtown Tribeca neighborhood in 1992. My struggle to achieve maturity in painting, which involved a shift to expressive abstraction, came to fruition after the World Trade Center was destroyed in 2001. The morning of September 11, I was in my studio when I heard the first plane hit. I immediately went into the streets with my wife, the artist Ruth Hardinger. As we rounded the corner on West Broadway, looking ten blocks south just after the second tower was hit, I asked Ruth, “How the fuck are we going to fix that?” This question remains central to my critical thinking today.